Off to the coast…

Leaving behind our luxury digs at Pier One Sydney we headed off towards the coast. A glimmer of hope thinking we could stop by the Big Rubiks Cube on the way was dashed when we discovered it was out on the beach at Maroubra and “No Dogs Allowed” applied to that beach; so we headed straight for the Grand Pacific Drive that would take us to our next destination – Greenwell Point.

The landscape changes quite quickly from suburbia to amazing forest not long into the drive into the Royal National Park and onwards to Stanwell Park. Unfortunately there were not really any opportunities to stop along the way for us as again we encountered a lot of “No Dogs Allowed” areas and without good mobile signal we couldn’t Google any other options, so we made a beeline for the Sea Cliff Bridge and on to Kiama for a lunch stop. It was a very gloomy, cloudy day so it was a bit disappointing that the views were not as spectacular as they could have been, but it is still quite amazing to drive over the bridge knowing we were effectively suspended above the sea. Mum snapped off some pics while I drove – the cliff face to the right and the ocean out to the left. 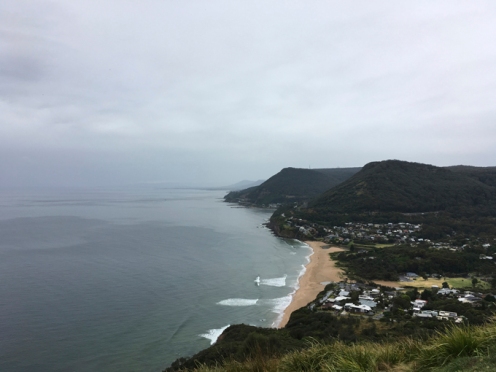 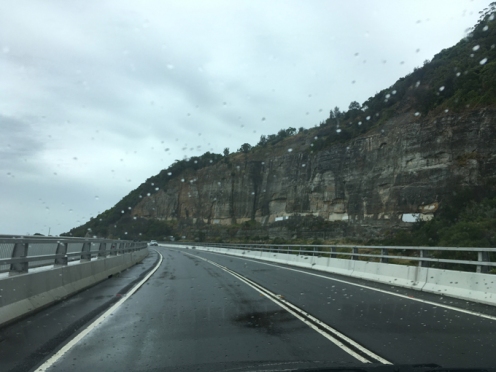 The little townships along this coast are lovely and you can’t help but wonder what it would be like to live in a cottage with awesome views in one of the small communities like Austinmer, Thirroul or Bulli. The historic buildings and the location… but the price tag… eeeek. Oh well, a girl can dream.

We arrived in Kiama at lunch time and found a nice place to stop for lunch, The Stonewall Café. Just a laid back, casual spot but they were one of the only cafes that had an outdoor space under cover that was more accommodating for the dogs. A great tasting focaccia with a coffee and a sneaky blueberry muffin had us feeling full and happy. Tobes and Audie chomped down on a few liver treats and then we all took a wander up the street.

As a by the by…using the VIVO Pet Stroller is so easy. Not only does it help Mr Toby come along for the walk, but it is a nice security blanket. Allowing us to stop at cafes or go along the street with the knowledge that we can pop the hood forward and zip it all up which means safety for the puppies, but they are also viewed as socially safe and tucked away for people who may not appreciate having them near their space…

Mum had a look inside the shops while the puppies and I wandered along the pathways. A nice surprise for us came when we stopped at a shop that both Mum and I were interested in looking through… instead of having to take it in turns, the girl who worked there invited us all in! As Tobes and Audie were safely tucked up in the VIVO, they posed no more danger to the shop than a child in a stroller… how awesome!! So we all got to have a look around and there was even a pet products section up the back. Sadly, there was nothing that jumped out at us as something we wanted to buy but we need to give a big shout out to The Collective Kiama which is a group of retail businesses all working together in the same building. A dash of quirky, some hand made, some repurposed, a bit of vintage and lots of charm.

Now, Kiama is famous for its natural attraction ‘The Blow Hole’, but we can’t tell you much about that as on a gloomy, dull day with the ocean at dead calm… no water blows up and the Blow Hole just kinda becomes just Hole… 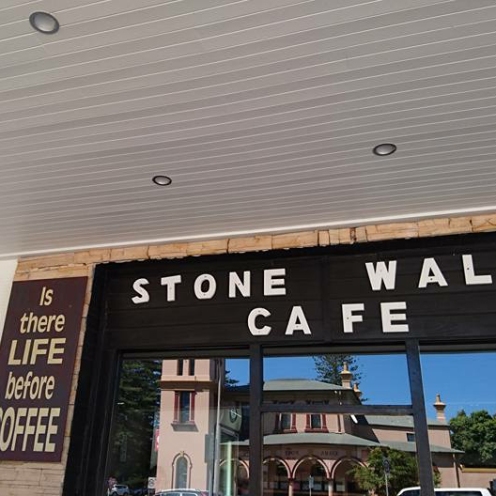 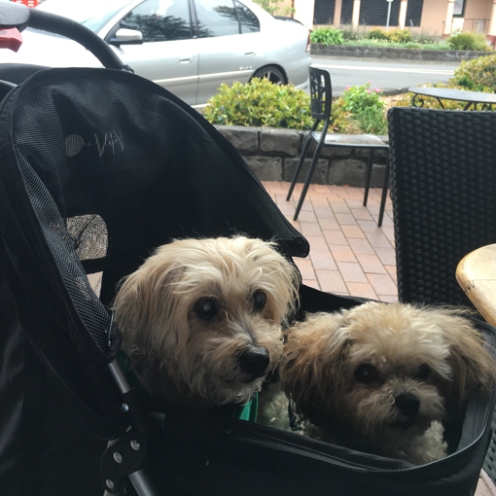 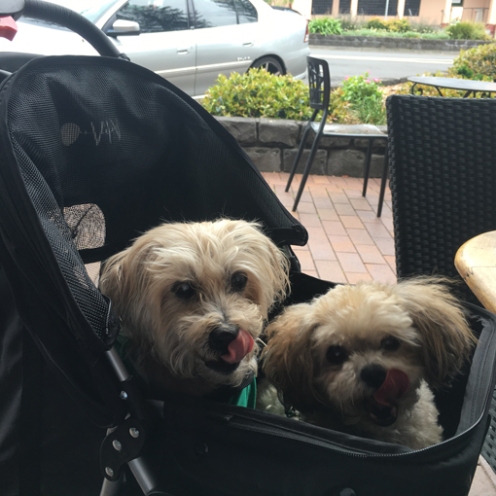 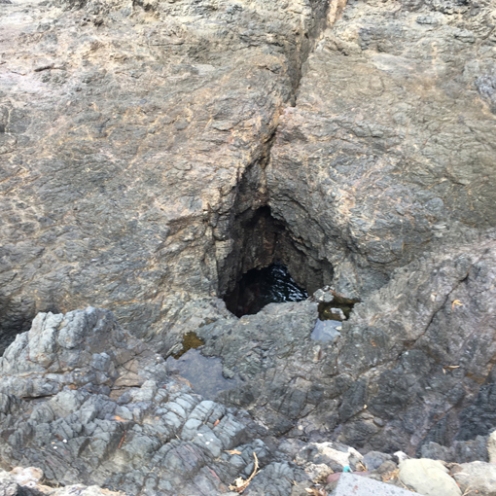 The hole did not blow

Since we didn’t actually know anything about Greenwell Point – including what would even be there when we arrived – we decided to stop at the supermarket and grab some supplies. Hoping for the weather to clear up I grabbed some dips, breads, crackers, cheeses and of course wine, thinking that when we arrived at our cabin we could sit on a verandah (if there was one) and enjoy the view (oh, if there was one).

The road to nowhere?

We headed south and followed the navigation system directions to Greenwell Point with only the knowledge that we would be somewhere along the NSW coast staying at South Coast Retreat. We were directed left off the highway at Nowra and into East Nowra… and along what seemed to be a random road to nowhere… The further we got along the road, the darker the sky became – weather definitely not clearing – and all I could do was apologise to Mum and the puppies for potentially bringing them to the worst place ever.

How wrong was I? As we drove up to South Coast Retreat at the very point of Greenwell Point we were completely surprised. What a location! We were in Cabin One at the front of the property right across from the water. A quick unload is a good unload especially with a storm front rolling in… and even with the gloomy skies and pouring rain the cabin was light and bright and really well appointed. Completely refurbished with nice fixtures, fittings and soft furnishings, I gave myself a little pat on the back for finding somewhere we had never heard of and giving it a go.

We broke the ‘no pets allowed on the chairs’ rule for a few minutes, as we couldn’t resist a photo on the funky coloured cushions! Audrey spent some time gazing out of the window with a look of what seemed to be disappointment that we couldn’t sit out on the deck to have our wine and crackers. Never mind… As the rain stopped a most glorious rainbow appeared across the sky, so big it could not be captured in the one photo frame and the humans settled in with a feast of goodies and a nice crisp wine! Tobes and Audie had a feast of their own then snuggled into their blankets for a snooze. 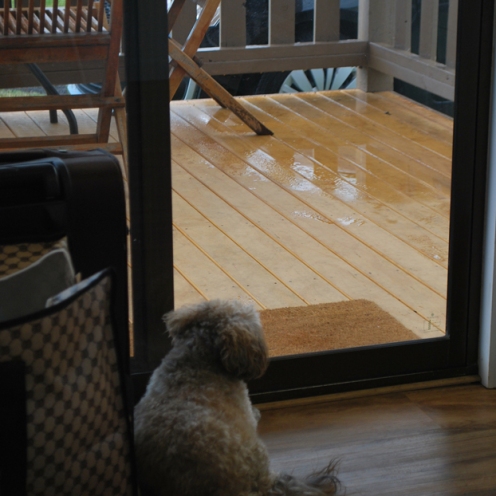 Audie gazing at the rain 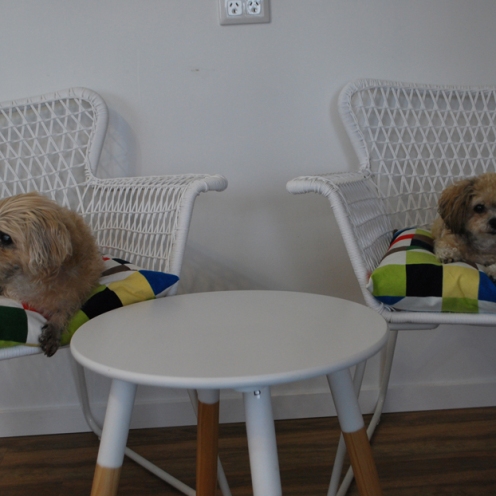 Ssssh… only on for a minute 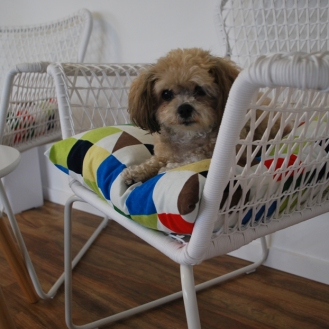 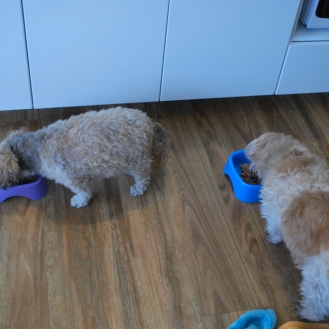 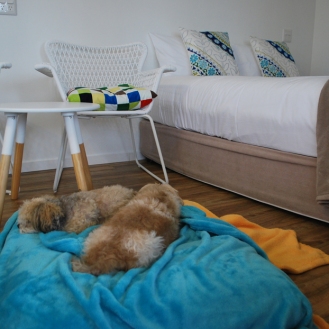 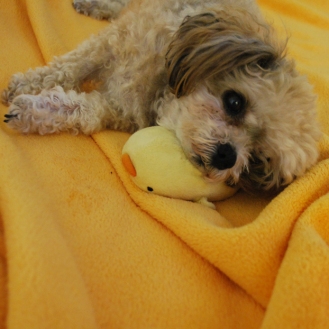 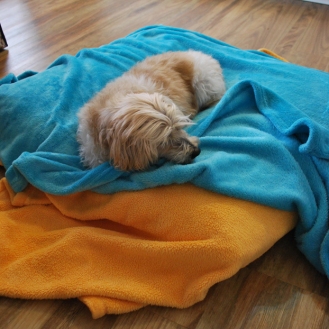 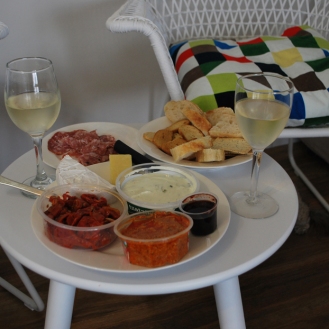 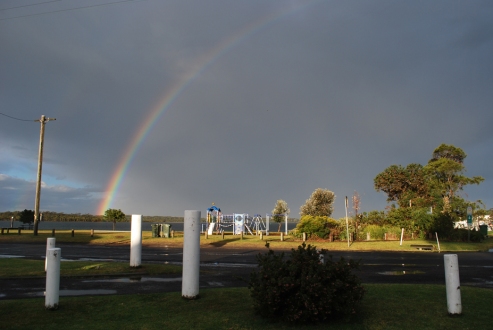 Waking up the next morning was a complete change to our arrival the day before… Stunning blue skies and glorious sunshine. Time for walkies!

Our cabin location was perfect. We sat and ate breakfast looking out over the glistening water and then took off for a short stroll along the river. The area is like an inlet from the coast with little beaches and calm waters. You can see up the river to the ocean and across to the mountainous area that we had driven past on the way here (we’ll be heading up and through them later…)

It felt nice to go for a walk and the distance was comfortable enough for Toby to have a turn out of the stroller. We walked along the small pier and stopped for a while just to sit and watch the world go by and wandered down to see the pelicans. 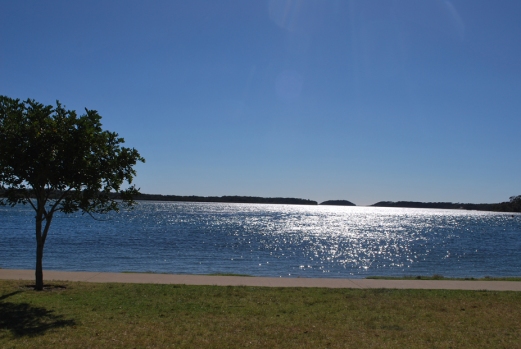 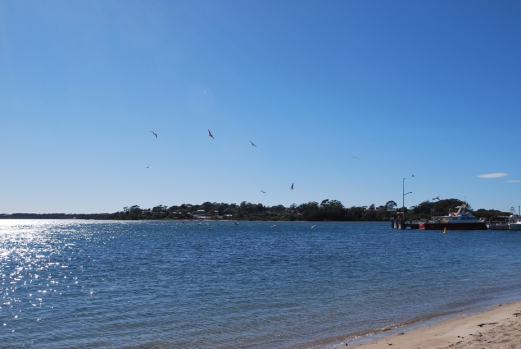 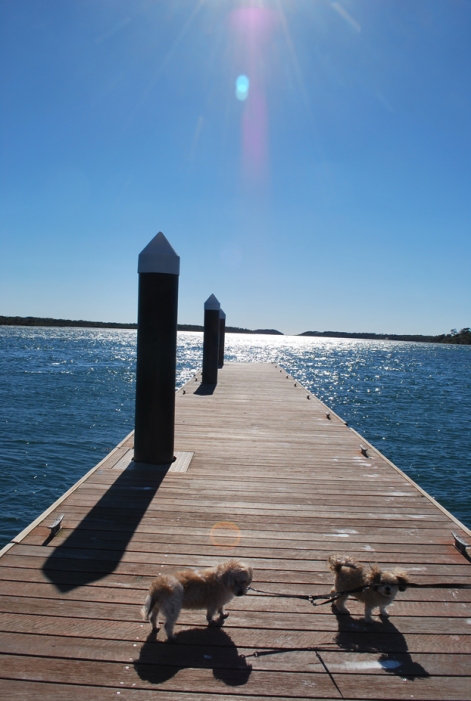 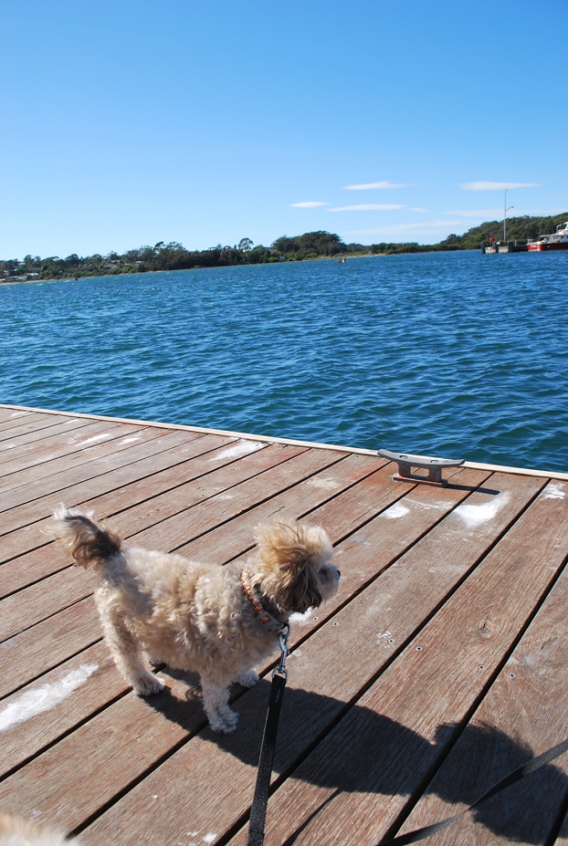 It was a little windy 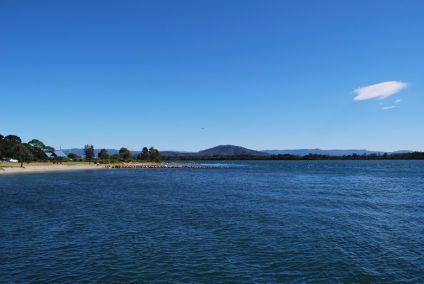 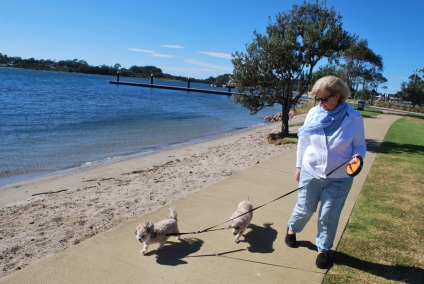 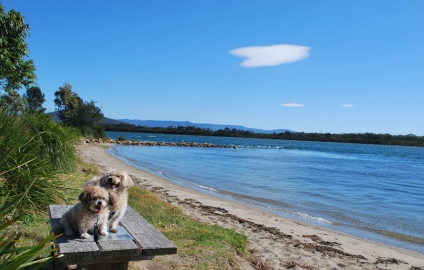 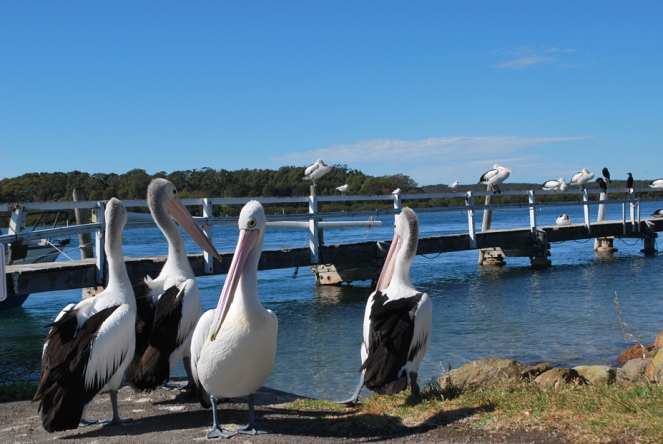 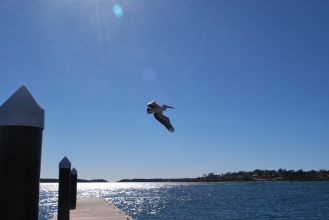 As I packed up the car I kind of wished I knew how great this place was going to be and we would have stayed on for another night or even more. But we had to keep on with the Road Trip and on to our next destination…

But Greenwell Point and South Coast Retreat… we’ll be back.